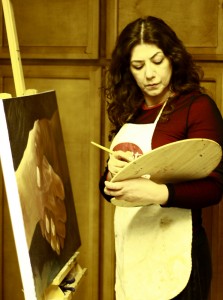 Tahereh Habibian has been painting with pastel, color pencil, water color and oil for 35 years.  Originally from Iran, she learned from notable masters, Morteza Katouzian, Mahmoud Meraji and Zoya Sadri amongst other influences. In 2002 after moving to the United States she continued her studies in painting with Chester Arnold at the College of Marin (Kentfield, CA)where she participated in Chester’s project “Face of the Fallen” (in 2005).